I, as many of us, became hooked on home brewing, and over the course of time ended up building a 15 gallon system with odds and ends found in my shop.  It worked well but my immersion chiller was the Achilles Heel – just too slow! Condensation was dripping back into pot and too much work to whirlpool efficiently.

I have been in the HVAC and home construction business for 30 years. So naturally, I started researching wort chillers! Based on my experience in heating and cooling, I determined a CFC was the way to go. I ruled out both convoluted and plate chillers because they are designed for clear liquids. Wort at the end of a boil is anything but a clear liquid, especially with the really hoppy beers that are becoming popular. I felt a smooth bore was needed and did my research.

I started looking at DIY info and the many ideas that were posed and began planning my own version of a CFC. I decided to use copper on the inner tube because it has the ability to transfer BTU’s much better than stainless. I Chose to go with PEX as the outer tube because it is bendable, can be used for potable water, withstands temperature and pressure requirements needed for brewing and lastly, was the affordable choice.

I also chose to wrap the inner tube with a nonmetallic coaxial line keeping in mind my objective to keep the piping centered and allow the cooling liquid to mix well, thus increasing my chilling efficiency.

Next: how to build it?

Many hours of trials and tribulations went into this, but I finally got it – I have a room full of mistakes and rejects to show for it.

The time came to test performance. We decided to make a video using the prototype because the idea of selling the Exchilerator was becoming more of a possibility as our efforts began transforming into a solid product. Needless to say, the look of surprise in the video is real – Its performance truly surprised me! The video can be viewed on exchilerator.com in the blog section or on YouTube.

My nephew Luke decided to build a retail site and Brick River Brew was born. On 5/22/14 an order came in and I only had a couple units built. Panic! Hell, I didn’t even have any boxes to ship them in, but we managed to fill the orders. With the help of my sister-in-law Terry, we were up and running and have been growing ever since.

Many thanks to my family, friends and customers who have made this venture possible. 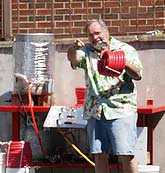